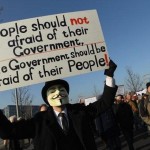 Retaliating the death of internet activist, Aaron Swartz, the Anonymous collective hacked the U.S. Sentencing Commission website on February 1st, replacing the content on the website with the video above. Aaron Swartz, internet genius and co-founder of Reddit.com, committed suicide after being convicted of stealing millions of articles off of JSTOR and re-posting them in order … END_OF_DOCUMENT_TOKEN_TO_BE_REPLACED