Our case study examines on the World Bank's role in facilitating economic growth in developing nations.  Specifically, we would like to focus on the World Bank's participation in the Lesotho Highlands Water Project (LHWP), an ongoing effort to supply South Africa's urban centers with water from the less-developed rural nation of Lesotho by building multiple dams along the … END_OF_DOCUMENT_TOKEN_TO_BE_REPLACED

Corruption has plagued the LHWP from its inception.  Masupha Sole, the Chief Executive of the Lesotho Highlands Development Agency, was accused of accepting more than $6 million of bribes from multinational corporations hoping to secure work on the project.  In 2003, he was convicted in a Lesotho court of accepting bribes, fined heavily, and sentenced to 18 years in prison … END_OF_DOCUMENT_TOKEN_TO_BE_REPLACED

Despite objections raised by particularized interest groups, the World Bank maintains that the Lesotho Highlands Water Project (LHWP) has, for the most part, been a success.  Both the Lesotho and South African governments realized the opportunity for mutual gain in the early 1980s, at which point Lesotho, a small African nation surrounded by South Africa, consumed only 6% of … END_OF_DOCUMENT_TOKEN_TO_BE_REPLACED 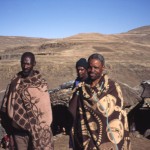 "I realize that we will be plagued by hunger because life here is mainly by the thing called pokotho, that is money. Now, we find that we are lost because the money we had been promised has not been given to us. Even the money we were paid for our compensation has been reduced drastically. We found that we will end up living much more poorly than where we came from. There are … END_OF_DOCUMENT_TOKEN_TO_BE_REPLACED 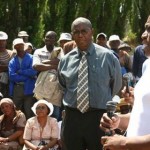 Two anthropologists, Paul Devitt and Robert Hitchcock, worked as consultants for the Lesotho Highlands Water Project.  Devitt worked on the original Feasibility Study in 1986 and filled the role of field anthropologist for resettlement and development after 1996 (Phase 1B).  Hitchcock (Michigan State University) is on the World Bank’s Panel of Environmental Experts for the … END_OF_DOCUMENT_TOKEN_TO_BE_REPLACED